You’re probably here because you’ve come across the term S&M and it freaks you out … but not enough to run away. There might even be a little curiosity budding under that sweet, vanilla exterior.

This world isn’t as terrifying as some media has painted it (or as ridiculously unhealthy as 50 Shades has portrayed).  In fact, the world is SO LARGE, there’s something in there for everyone.

In short, S&M stands for sadomasochism. But an answer like that is about as accurate as my grade ten math exam and as satisfying as the series finale of Sopranos.

The better and more inclusive term?

Heavy sounding words with an entire universe of confusion and judgment surrounding it. And it does sound very dark.

You probably think of something like the black and white image of “Steppy Leather Lady”.

However, would you think of something like this image with “Cat Girl”?

This adorable, little kitten is into Pet Play. Scratching behind the ears, stroking of the back, told she’s the cutest thing ever.

WHAT EACH TERM MEANS

And yes, the fuzzy pink handcuffs in the bottom of your draw count.

DISCIPLINE = Using rules and punishments to control or correct behavior.

It might sound scary (like getting caught jerking off in a church by a nun … or 10 of them), but this can be exercised in any degreeyou can imagine — but only in degrees you consent to.

Punishments are always discussed and agreed upon ahead of time. It can include: lectures, physical pain, humiliation (e.g. standing in the corner, naked), psychological punishments, loss of freedom (e.g. losing your computer or phone privileges)

“Since you can’t hold still, I’m going to have to tie you up.” or“Handwrite ‘I will not be late’ three hundred times.”

Or, in m my case, “Do the multiplication table without a calculator or fingers … or toes.”

DOMINANCE & SUBMISSION = The power exchange between two people. One having control over the other actions.

It can be done over the phone, email, text, or in person. If you hear the word “Switch”, it means the person goes both ways – dominant and submissive.

There are many reasons why people choose either role, but the exchange is to give BOTH parties pleasure, not just one.

SADISM & MASOCHISM  = This is where we get the S&M (although SM or S/M is the more commonly used acronym).

The pleasure derived from giving or receiving pain or humiliation. Not to be confused with the other usage of someone with cruel intentions. Aka. Assholes.

Okay. Fine. But which sport? 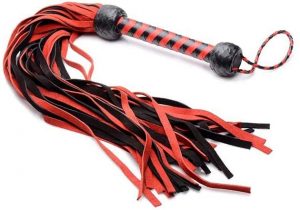 Where is this sports rant going?

What do you get?

ONE SIMPLE FACT: There’s no one “right” way to be kinky.

People have to do what works for them and their partner and not push it onto others (you can discuss, share, and disagree, but never push).

EXAMPLE: One girl could like being tied up but hate spanking while her friend is the opposite. A dude could get off wearing his wife’s underwear and ball gag while cleaning the bathroom, but only twice a year. You might like handcuffs, but not be interested in them after a few years.

Which brings us to the next important part…

People agree to play whether through a formal contract, verbal agreement, or casual conversation – it’s anything that clearly communicates they are aware of, educated on, and comfortable with the terms set forth.

Hell, my man and I know each other so well, a wink will do.

There’s also the word “revocable”, meaning they can take back the consent (aka changing their minds) and cease play at any time they want.

And just for fun …

Aka, you can hurt someone but not HURT someone. So you should buy materials and tools that are reliable, unlike those famous chastity cage scams.

To do this, one should research and understand the kink they’re about to explore.

EXAMPLE: What’s the cause of compression marks, rope burn, pinching, and bruising? Don’t know? Don’t get into Shibari (Japanese rope bondage) without some serious homework.

YEP, a huge amount of your kink world will be…

There is also the  ALL HOLY, ALL POWERFUL, NON-NEGOTIABLE …

What is this word people keep going on and ON about?

It’s a special word or designated movement which communicates to the person controlling the scene that there is a problem and play needs to immediately stop.

You CAN. It’s a perfectly acceptable choice.

But yep, you guessed it, there is a ‘however” coming.

It needs to be something you normally wouldn’t scream in the middle of an intense moment. If you’re in a scenario where you want to say “stop” BUT DON’T REALLY WANT THEM TO, then it’s not a good choice – it will just confuse the shit out of your Dom/Domme.

A common choice is the traffic light system:

This rule doesn’t apply to only the “bottom” (someone giving up control). “Tops” are totally within their rights to use safety words as well.

We’re not talking about my friend’s general consensus on my state of mind … or lack thereof.

It’s having a healthy, sensible, and realistic frame of mind that is free from psychological derangement (here’s where my friends tend to laugh and say I’m excluded)

Stay away from the batshit crazy play partners and predators posing as Doms/Dommes.

They have appropriate self-control and are respectful.

Since we’re dealing with power-exchange, and handing over large amounts of trust, making sane (controlled) choices is paramount.

The absence of SSC (forcing or pressuring someone to perform a sexual act that they are not willing to do and doing something that can endanger them) is rape and/or abuse.

I know it’s a lot of info but stay with me here.

Limits are something you should talk about before you even agree to play.

But there’s not just one kind.

Soft Limits – something a person is uncomfortable with, can be consented to but requires a cautious approach

Hard Limits – under no circumstances can the action be done, violating a hard limit is just cause for ending a scene and sometimes a relationship.

“Under no circumstances can you slap me in the face or insult me.”

Requirement Limits aka Must Limits – something MUST happen in a scene/play.

“You need to give me lots of kisses.”

Time Limits – a set period of time which a scene or relationship (e.g. contract) will last.

“We will play for one hour, and one hour only.”

It’s recommended you take your time and have LOTS of communication with your partner. It won’t happen quickly.

If you’re lucky you’ll find someone you can talk to and confide in, but please make sure they are they healthy kind of person to be around. If there is no one to talk to, don’t despair! There are TONS of material on the internet and in books.

You can tiptoe into the shallow end of the pool by trying:

Read on if you want a funny story about a Japanese fetish party, or just skip to the end.

Society and, in a large part, media has misrepresented and painted these practices as something dark, violent, and disturbed (like an episode of Law and Order: SVU) – that only those who were abused or are bonkers like such things.

It’s a rather large injustice to a community that is full of wonderful, kind, open people.

We need to be careful not to pigeonhole people into categories based on a single glimpse or a thimbleful of knowledge about that person’s life.

Understand, it’s all measured in experience and perceived extremes.

As long as it’s SCC between two (or three or four…) people, it’s really nobody else’s business.

For example Story Time in Japan

I went to a fetish party in Japan and watched a girl being tied up by a Bakushi Master (Bondage Master).

As he was pulling on the ropes, she started to bawl.

I mean, these were full on sobs as if someone just told her she had to repeat high school, Santa wasn’t real and then kicked her puppy. My first instinct was that she was in trouble and the scene should stop.

I looked around the crowd of admirers.

Why no one was stepping in??

It was immediately followed by a string of Japanese that loosely translated into, “Stop that, you (add explicative here) !” She then looked up and the Bukushi Master gave a little smile and asked him to continue.

Many people choose to keep their lifestyle a secret for fear of judgment or repercussions – like losing your job because your boss thinks you’re going to whip out a flogger in the middle of your business meeting (even though you haven’t in the five years of previous meetings). Some, however, choose not to hide their preferences. This is also classified as coming out.

Explore, try, and test. But above all, be SAFE!